Blog
You are here: Home1 / Blog2 / News3 / News and Updates – FAA and NASA Conduct Crash Test on a Regional...

The Fokker F28 is a regional jet that is used on short to medium-haul flights to transport passengers from hubs to regional airports. A crashworthiness test was conducted to advance safety research on the structural performance of this style, design and materials for this size of aircraft.

NASA conducted a swing test and simulation of a narrow-body transport fuselage section of the Fokker F-28. The test simulated an aircraft crash onto a dirt surface. Data from the test are used by the FAA to develop guidance on how to determine crashworthiness of various aircraft. The data also help researchers ascertain how portions of the cabin interior and occupants of the aircraft react in a crash. Twenty-four test dummies ranging from small children to adults, one weighing approximately 273 pounds were used in this aircraft test.

Test results will also support the development of a new performance based rule that will simplify the certification process by eliminating or minimizing the use of special conditions to certify aircraft.

The FAA conducted the test in collaboration with NASA, the FAA Civil Aeromedical Institute, U.S. Army Test and Evaluation Command, and the National Transportation Safety Board. Reports from the test will be available to the public. 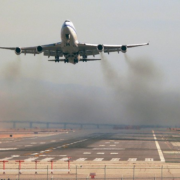 News and Updates - Vapes on a Plane?

Want to join the discussion?
Feel free to contribute!